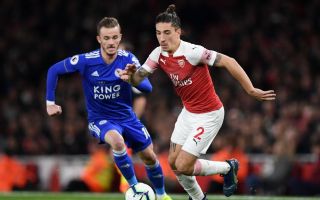 Arsenal right-back Hector Bellerin was in superb form against Leicester City on Monday night as the club strolled to a deserved 3-1 win.

The Spaniard picked up two assists on the night, showing some superb ability on the ball as he broke forward from defence.

Remarkably, this means Bellerin has now already surpassed his total assist record from last season, where he set up just three goals in the Premier League.

Bellerin is now on four in just nine games this term, having set up two last night, one against Fulham and one earlier in the season against West Ham.

Héctor Bellerín has already surpassed his total number of league assists from last season in just nine games in this campaign.

The 23-year-old looks to be just one of many players catching the eye this season with what seems to be a big improvement under new manager Unai Emery.

Arsenal had notably stalled under his predecessor Arsene Wenger, who for some time failed to get the best out of what was clearly a talented team.

Emery has Bellerin playing some of his best football now, as this impressive stat shows.