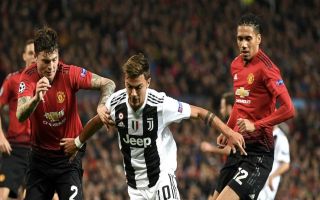 The 24-year-old centre-back’s career at Old Trafford has been blighted by inconsistency over the last year and a half, however, if Tuesday night’s performance against the Old Lady is anything to go by, he may have finally turned a corner.

The Swede stood-out with his commanding presence in the heart of the defence for Jose Mourinho’s men and did everything he could to prevent a Cristiano Ronaldo inspired opposition from running away with the game.

A Paulo Dybala first-half strike ultimately earned Juve a 1-0 win, but Lindelof can walk away with his head held high after earning the approval of fans across Manchester.

This particular supporter singled the defensive stalwart out for praise as the team’s best performer on the night, while many others joined him on Twitter with positive comments.

The Red Devils poor start to the season drags on, but Lindelof seems to be growing into his role in the starting XI and winning the trust of Mourinho, who opted to keep him in defence following his display against Chelsea on Saturday in the Premier League.

United must now focus their attention on a huge domestic clash against Everton at the Theatre of Dreams on Sunday, which is a must-win game if they are to stay within sight of joint league leaders Manchester City and Liverpool.

Check out more fan reaction to Lindelof’s performance below, via Twitter:

Lindelof has been United’s best player. De Gea excellent as per.

All I saw in that pitch is a young Swede national trying his best…. All the others shouldn’t get this week’s salary, Mata can get half the salary so that he can give us hugs in return. But everyone else should be whipped three hot ones on the government’s meat. #MUNJUV

Lindelof will come good. I have said this many many times.
My MOTM today!

I may be wrong, but credit should go to Victor Lindelof, great improvement from the lad- read the dangers and stopped many attacks- OUTSTANDING. #MUNJUV

Best of the bunch for #mufc today was Victor Lindelof. Thought he was superb. He has to kick on from here now though.

Seen plenty having a go at Lindelof on here over the last week. Best United player on the pitch tonight. Well in lad.

Lindelof best player at Chelsea and tonight. Nice to see some progress from him. #MANJUV

If Lindelof can play like this in week in week out then #mufc would be greatly benefitted by just a single addition of a CB in next transfer window. A better version of Smalling. #ucl #MUNJUV