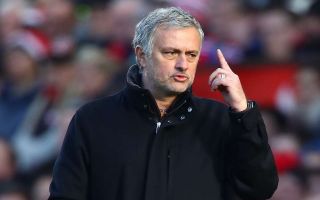 Manchester United boss Jose Mourinho praised his team’s display against the Blues once again, before aiming a dig at his former club.

The Portuguese boss spoke to reporters ahead of United’s crunch Champions League encounter against Juventus on Tuesday night and couldn’t resist a fresh swipe at Chelsea following their 2-2 draw at Stamford Bridge.

“We played so, so well that it was hard to take that we only got a draw,” Mourinho said, as per United Xtra on Twitter. “The boys were brilliant, we had control of the game and I have never heard Stamford Bridge so quiet in all my time in England.”

Mourinho: “We played so, so well that it was hard to take that we only got a draw. The boys were brilliant, we had control of the game and I have never heard Stamford Bridge so quiet in all my time in England.” #mufc [United Review]

The Red Devils were seconds away from securing all three points on Saturday after a brace from Anthony Martial put them 2-1 up, but Ross Barkley spoiled the party with a last-gasp equaliser.

So close to victory after a stunning second-half comeback, but it wasn’t to be.#MUFC #CHEMUN pic.twitter.com/vuzFGG7Xj2

Mourinho faced boos and negative chants from Chelsea fans all afternoon and his latest comments will only alienate them further, despite the fact he managed to win three Premier League titles during his time at the club.

United’s attention is firmly on Juventus now and the 55-year-old coach named an unchanged line-up for the heavyweight clash against the Old Lady, which they cannot afford to lose after drawing against Valencia in their last European outing.

Mourinho will always divide opinion and his latest comments highlight exactly why, as he is so easily provoked by small things which can often cloud his better judgement.

However, with his future at Old Trafford still very much in doubt, at least his team is beginning to show a bit of fight and renewed vigour in attacking areas, which supporters will hope continues against the Italian champions in Europe tonight.