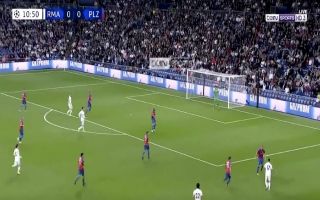 The Los Blancos centre-forward had scored just 4 goals this season prior to tonight, as the club has recently embarked on a five-match winless run in all competitions.

However, that all looks set to change as Julen Lopetegui’s men have got off to the best possible start in their Champions League group stage encounter at the Santiago Bernabeu.

The Frenchman headed home a pinpoint Lucas Vasquez cross at the back post, which marked his first goal since September 1st and saw him move up to fourth outright in the all-time Champions League scoring charts ahead of former Man United striker Ruud Van Nistelrooy.

Benzema now trails only European greats Raul, Lionel Messi and Cristiano Ronaldo and Madrid fans will hope his latest strike will be the catalyst for a turn around in his and Madrid’s fortunes in the coming weeks.

Check out the 30-year-old’s landmark header below, via Twitter: