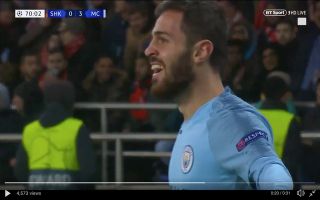 Manchester City’s Bernardo Silva showed his class for the Citizens only one minute after entering the pitch for Kevin De Bruyne – Bernardo started and finished the deadly counter-attack.

Bernardo carried the ball out of defence before laying off the ball to Riyad Mahrez.

Bernardo received the ball back from Mahrez and after a clever run from Gabriel Jesus opened up the Shaktar defence, Silva was free to surge forward and score with a great finish from the edge of the box.

Check out Silva’s goal below:

"Strolls on and takes the stage."

Bernardo Silva is certainly proving to be the heir to David Silva’s throne at Manchester City. The 24-year-old looks like he is going from strength to strength under Pep Guardiola’s tutelage.