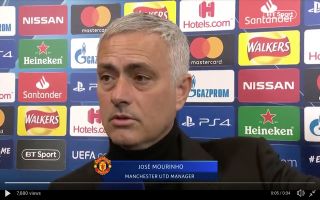 In a bizarre turn of events this evening Manchester United manager Jose Mourinho has decided to walk from the team hotel to Old Trafford with the United team bus stuck in traffic.

Mourinho opted to walk to the ‘Theatre of Dreams’, deciding to put his hood up to avoid being spotted by fans, Mourinho later told BT Sport that the walk took him “only two minutes”, whereas the journey in the team bus took a staggering 45 minutes.

Check out the video of Mourinho making the walk to Old Trafford courtesy of MUFC Away Days below:

United bus late to the stadium. Jose walking to the ground from cricket ground. pic.twitter.com/ShoHNiKab0

Check out Mourinho’s reaction to walking to the stadium with his pre-match thoughts from BT Sport below:

"I walked in a hoodie, in the middle of the fans, no one recognised me. I took two minutes."

Jose Mourinho strolled to Old Trafford, as his Man Utd team sat for 45 minutes in traffic on the bus… pic.twitter.com/BoNXb6vjea

Mourinho opting to walk to the stadium shows that the Portuguese boss means business tonight.

The stakes can’t be much higher for the Red Devils this evening with Cristiano Ronaldo returning to Old Trafford sporting his new Juventus colours.

United will certainly be hoping to spoil the superstar’s homecoming.