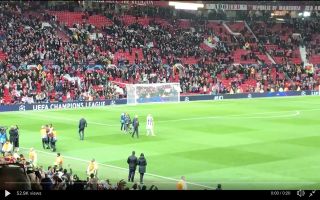 Manchester United fans showed they are a class act by giving Cristiano Ronaldo a magnificent send off after Juventus defeated the Red Devils 1-0 at Old Trafford.

The Portuguese attacker spent six glorious years at Old Trafford before joining Spanish giants Real Madrid in 2009. United fans saw tonight as an opportunity to thank Ronaldo for his time at United with a powerful rendition of ‘Viva Ronaldo’ echoing around the stadium.

Check out some videos of United fans giving Ronaldo a massive send off:

The 33-year-old’s return to Old Trafford was a successful one and the five-time Ballon d’Or winner will be hoping to lead Juventus to Champions League glory this season.