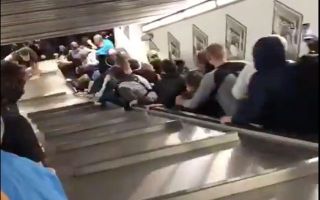 Reports claim that CSKA Moscow fans in Rome for their Champions League clash with Roma have been injured after an escalator broke down in the Metro station.

As reported by Sky Italia, an escalator in the Repubblica station ‘gave way’ with up to 10 supporters said to have suffered injuries.

The incident was seemingly captured in the video below, as the escalator appears to send the fans flying down to the bottom where they all begin to collide and fall to the ground.

Others can be seen desperately scrambling into the middle section to avoid being involved in the pile up in worrying scenes with updates likely to continue ahead of kick-off.

It’s suggested in the report that the CSKA Moscow fans may well have caused the damage themselves, but at this point it’s unclear until anything is confirmed by officials.

This has just happened with CSKA fans in Rome after an escalator broke down. Multiple fans have reportedly been injured. pic.twitter.com/LNRfcKqjRF