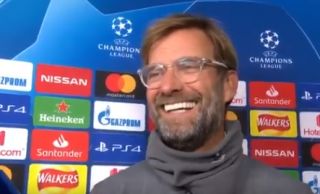 A huge smile burst across Jurgen Klopp’s face at the mention of Xherdan Shaqiri’s performance against Red Star Belgrade tonight.

The Liverpool manager then sung the praises of his Swiss winger after an influential performance in tonight’s 4-0 Champions League victory, showing he’s clearly a big fan.

Shaqiri has certainly looked the part since his summer move from Stoke City, even if he wasn’t initially a regular starter in Klopp’s XI.

Liverpool fans were full of praise for him after his classy involvement in the two first half goals, and they’ll love seeing Klopp’s reaction in the video below when he’s asked about the player…

"Shaqiri, it's like he's involved in pretty much everything!"

Jurgen Klopp is full of praise for the man who dominated Anfield tonight ?

That's why they call him the Alpine Messi… pic.twitter.com/rrSuNE4Euc