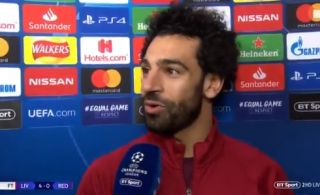 Liverpool star Mohamed Salah gave a hilarious response when asked about his recent goal drought for the Reds.

The Egypt international was back to his best tonight with a brace in the Champions League game against Red Star Belgrade, which followed his goal against Huddersfield Town at the weekend.

MORE: Mohamed Salah does something no one has ever done before after scoring 50th Liverpool goal

Before that, Salah had gone four games without scoring, which counts as a drought for him after his ridiculous exploits last season.

Still, he gave an amusing response here as he asked ‘who?’ aggressively when the reporter on BT Sport mentioned some people were talking about his goal drought.

It’s clear the 26-year-old is pretty relaxed about his own form, which LFC fans will be delighted to see.

"Remember when people were talking about your goal drought?"