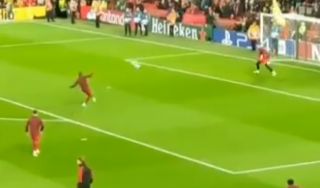 Liverpool fans will hope midfielder Georginio Wijnaldum changed his footwear before kickoff against Red Star Belgrade tonight – because he didn’t have his shooting boots on in the warm-up.

Watch this hilarious video below as the Dutchman remarkably hits the woodwork with three efforts in a row in a shooting drill.

MORE: Why Liverpool’s Xherdan Shaqiri is getting booed against Red Star Belgrade at Anfield tonight

Usually a decent source of goals from the middle of the park, Wijnaldum got pretty unlucky with all three efforts, but can’t afford to get those wrong once it’s in a match situation.