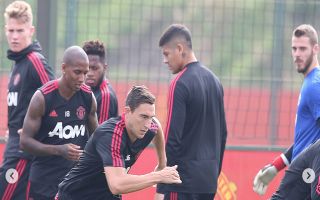 A Manchester United defender has been linked with a surprise move away from Old Trafford to Turkish giants Fenerbahce in the January transfer window.

According to Mirror Football  Fenerbahce are keen on signing United centre-back Marcos Rojo in the January transfer window.

The Argentinian only signed a new contract with the club until 2021 in March this year, Rojo has since failed to establish himself in the first team due to ongoing injury problems.

United signed the aggressive no nonsense centre-back from Sporting Lisbon in the summer of 2014 for a fee reported to be £16m according to BBC Sport.

During his time at Old Trafford Rojo has won the FA Cup, a League Cup, the UEFA Europa League and the FA Community Shield.

Rojo’s injury return suffered a setback when the Argentina international picked up a problem whilst regaining fitness when playing for the club’s Under-23s.

Rojo is now back in training and could well regain his place in the side soon with Jose Mourinho needing to find a way to fix United’s defensive problems.

United are currently leaking goals and must improve if they are to qualify for the Champions League this season.