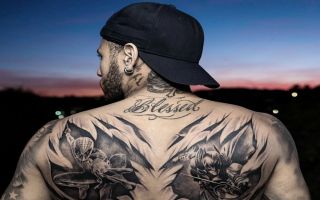 Paris Saint Germain winger Neymar has added to his comprehensive body art with two new designs, as a tribute to his favourite comic book characters.

The Brazilian is preparing with the French champions for a huge European showdown against Napoli on Wednesday night, but he obviously took a break from training to get tattooed in a moment of divine inspiration.

Spiderman and Batman can now be seen on his shoulder blades in an artistic, black and grey design which sees both characters almost meet in the middle, covering almost the entire portion of his upper back – as you can see below via Twitter.

These outrageous new tattoos certainly have a unique, retro feel to them and clearly show that Neymar takes inspiration from his favourite fictional characters, whose larger than life personalities and abilities mirror his own on the football pitch (Arguably).

PSG kick off their latest Group C Champions League encounter at 8 pm in front of their own fans at the Parc Des Princes and supporters will hope that Neymar’s latest fashion statement proves to be a lucky omen for the team as they bid for an important three points.

Check out the 26-year-old getting the tattoo done while watching a poker game below: