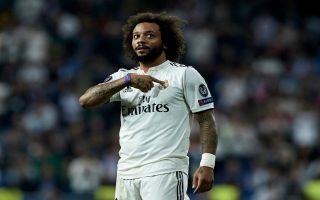 Real Madrid full-back Marcelo insists he has received no offers from Juventus but stops short of ruling out a move in the future.

The Brazilian has spent his entire career at the Santiago Bernabeu to date and earned a sterling reputation as one of the world’s best defenders over the course of 328 appearances for the club.

The 30-year-old has won the Champions League on four occasions while also winning the same amount of La Liga titles and remains one of the team’s most important players to this day.

However, at the start of the week, Italian publication Tuttosport suggested that Marcelo hopes for a move to Turin in January, which he has come out to address on Wednesday morning.

“I have not listened to any offers,” Marcelo told reporters, as per ESPN. “I have a contract with Real Madrid, and when I signalled the badge, it was to show that this is Madrid and we always come back.

The Brazil international was speaking after Madrid’s 2-1 win against Viktoria Plzen in the Champions League on Tuesday, which saw the team pick up their first victory in six matches.

Marcelo was then pressed on whether he would entertain the possibility of a transfer to Juventus in the future, to which he responded frankly: “I have said many times that there is nobody more Madridista than me.

“You are looking to get something, but you will get nothing out of me.”

Los Blancos have been poor at the start of the 2018-19 campaign and look a shadow of the team which won the Champions League for the third successive year back in May.

El Clasico is fast approaching on Sunday, which sees Julen Lopetegui’s men travel to the Camp Nou for a must-win game and Marcelo will be vital in keeping Barcelona’s most threatening attacking players at bay.

His latest comments seem to suggest that the Juventus links are nothing more than rumours, but he may still find himself tempted in the new year if they Serie A giants come calling, particularly if Madrid continue to struggle on the pitch.