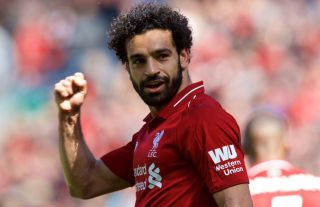 Liverpool star Mohamed Salah has just made a small piece of history after netting his 50th goal for the club this evening.

The Egypt international has been sensational since joining the Reds from Roma last season, and he’s hit a half century tonight with a first-half strike and second-half penalty in the Champions League game against Red Star Belgrade.

Remarkably, Salah has hit his 50 goals in just 65 appearances – meaning he’s the fastest Liverpool player ever to get to that number.

Fernando Torres had previously been the quickest, netting his first 50 goals for the Merseyside giants in 72 appearances, according to Squawka.

Only two players in Liverpool's history have scored 50 goals in fewer than 80 games:

Given that Torres was a striker and Salah mostly plays on the wing, this is a truly incredible feat that deserves huge credit, and LFC have not exactly been short of other great goal-scorers either, such as Luis Suarez, Michael Owen and Robbie Fowler in the Premier League era alone.

Although Salah has been a little slow to get going this season, he seems very much back to his best this evening.