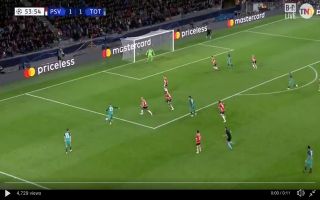 Harry Kane scored his 11th Champions League goal in only his 13th career appearance in the competition for Tottenham against PSV this evening.

Kane completed Tottenham’s comeback from a 1-0 deficit with a great header. The credit goes to Christian Eriksen for playing a tight one-two with Heung-min Son before delivering an inch perfect cross into Kane.

Tottenham have endured a tough start to their Champions League campaign so far this season and they may well exit in the group stages with both Inter Milan and Barcelona proving to be tough competition for the North London club.

Christian Eriksen whips in a beautiful ball from the left and puts it on a plate for Harry Kane to nod us in front! Get in!#THFC #COYSpic.twitter.com/YDprhU0fUE

Spurs take the lead and it’s their talisman Harry Kane with the goal!