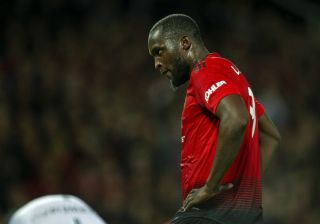 Manchester United striker Romelu Lukaku extended his barren run in front of goal to eight games on Tuesday night and showed off his poor first touch.

The Belgian striker cut a forlorn figure up top for the Red Devils in the Champions League against Juventus at Old Trafford, largely on the fringes of the action and unable to have any real impact on proceedings.

The 25-year-old has several glaring deficiencies in his game at the moment and they were perfectly encapsulated during one inexplicable moment against the Italian champions, as he picked up the ball on the right-hand side of the pitch.

Lukaku brought the ball down but somehow came close to running it out play, allowing it to bounce awkwardly off his foot before eventually attempting a cross into the box.

The pass ended up looking more like a crossfield ball and fell straight to Juan Cuadrado on the left, who was then able to launch a counter attack for the visitors.