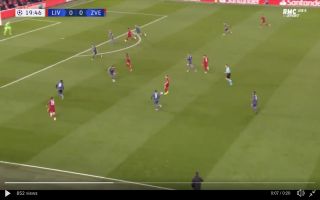 Striker Roberto Firmino fired Liverpool into the lead in their Champions League tie against Red Star Belgrade this evening after a wonderful assist.

In the 20th minute of the tie Firmino had a slight stroke of luck when his left-footed shot was deflected into the net.

It was the build-up play that really caught fans eyes though, summer signing Xherdan Shaqiri threaded a perfect pass into Andrew Robertson which split the Red Star defence in half.

Robertson then picked out Firmino with a great pass before the Brazilian took a touch and hit the back of the net with a left-footed strike.

See More: Why Liverpool’s Xherdan Shaqiri is getting booed against Red Star Belgrade at Anfield tonight

All started from Shaqiri winning the ball back, what a threaded pass to Robertson and a cool finish by Firmino. pic.twitter.com/yWyD7Jvb6V

The free flowing football on display by the Reds tonight shows that they are a force to be reckoned with in the Premier League and Champions League this season.