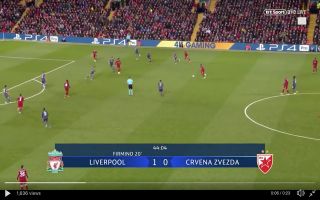 On the stroke of halftime Liverpool extended their lead against Serbian minnows Red Star Belgrade through star man Mohamed Salah.

After an ambitious pass forward from Georginio Wijnaldum summer signing Xherdan Shaqiri produces an outrageous first touch pass which teed Salah up perfectly to smash the ball into the back of the net on his weaker right foot.

Shaqiri has been a standout performer for Liverpool in the first half and the former Stoke man also had a hand to play in Firmino’s opener earlier in the half.

Mo Salah scores with a cool finish to make it 2-0. #LFC #YNWA pic.twitter.com/rHThcVy9EH

Click here to see what Liverpool fans had to say on Shaqiri’s performance, some even called the Swiss star the ‘signing of the summer’.

Mohamed Salah scores his 49th goal in 65 games for Liverpool.

Liverpool are showing why they need to be considered as a major threat in the Premier League and Champions League this season.