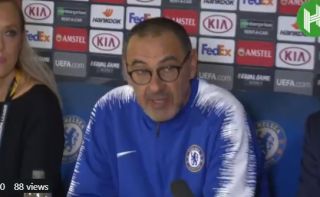 Chelsea manager Maurizio Sarri gave some mixed messages over Ruben Loftus-Cheek after the win over BATE Borisov on Thursday night.

The England starlet made the most of a rare start by scoring a hat-trick in the club’s Europa League victory at Stamford Bridge, and it may be that this is the start of more playing time for him.

Speaking after the game, Sarri can be seen in the video below admitting he’s an admirer of Loftus-Cheek’s talents and that he now has the added bonus of having adjusted to his playing style.

However, BBC Sport also quote the Italian tactician as saying he has so many options in midfield that fitting him in might be an issue.

‘We have four midfielders and three of them have the same characteristics,’ Sarri said.

"He is now suited to my style of football" ?

‘We have a tactical problem with the midfielders.

‘At the beginning of the season he [Loftus-Cheek] was a very good player and now he is a good player that is more suited to my style of football.’

Still, it’s certainly progress from the 22-year-old, who has barely featured this season despite long looking like a top young talent.

The manager can’t ignore him as easily after tonight, and if it’s true that Loftus-Cheek is starting to look more suited to his style, then that surely gives him some hope.