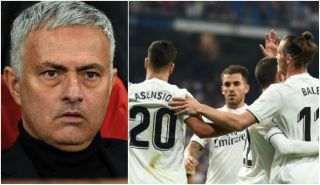 Manchester United are reportedly one of the clubs ‘positioned’ to seal the transfer of Real Madrid midfielder Toni Kroos.

While it’s not entirely clear what this translation from Don Balon‘s report means, it suggests United are ready to pounce for Kroos, whom the Spanish outlet states is keen on a move to the Premier League.

MORE: Alexis Sanchez picks preferred next club as he and Manchester United agreed on transfer

The report states the Germany international could command an asking price of around €80million, which seems a fairly reasonable price for the Red Devils to pay for one of the finest players in the world in his position.

Kroos would also be ideal for Jose Mourinho’s struggling side at the moment as an upgrade on struggling midfielders like Paul Pogba and Fred.

The 28-year-old has won a host of major honours in his career, lifting the Champions League four times in spells at Bayern Munich and Real Madrid, as well as the 2014 World Cup with Germany.

Don Balon mentions interest from the likes of Manchester City and Paris Saint-Germain as well, but if United could win this transfer battle it would be huge for their prospects this season.

This squad looks to be crying out for a player of his quality and experience, so he seems an absolutely ideal fit for the team in the second half of this season.