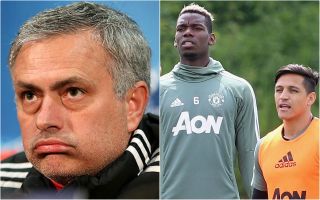 Manchester United midfielder Paul Pogba would reportedly still ‘jump at the opportunity’ to seal a transfer to Barcelona after a tough time at Old Trafford.

The France international has rarely looked himself in a United shirt, struggling with confidence and failing to really make the kind of impact on games that would have been expected of him when he joined in 2016.

MORE: When Zinedine Zidane could join Manchester United as Jose Mourinho future hangs in the balance

This has seen Pogba linked with a move away from the Red Devils for the last few months, though admittedly that talk has died down slightly in recent weeks.

However, it’s back again as the Daily Mail mention in a report today that the 25-year-old would still be eager to leave his current club and switch to the Nou Camp, though there are question-marks raised in the piece about how likely this would be.

It seems commercial reasons may convince United not to cash in on Pogba, while it’s also suggested by the Mail that Barca may currently struggle to afford to sign him anyway.

United fans will be disappointed to hear Pogba is still thinking about his future lying elsewhere, but if a move away is not on the horizon, they’ll hope it presents an opportunity for him to finally get back to his best.

It may take a change of manager at United for this to happen, but one imagines few fans would complain if Jose Mourinho were to be replaced now.