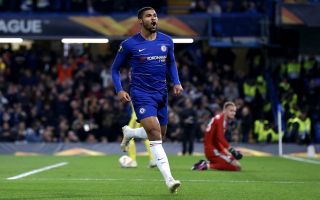 Chelsea midfielder Ruben Loftus-Cheek scored a hattrick against Bate Borisov in the Europa League on Thursday, which ended a long jinx for the club.

The Blues starlet scored twice in the opening ten minutes of the game with two expert finishes, before adding his third early in the second half with a brilliantly placed shot from just outside the box, as the team ultimately ran out 3-1 winners.

The Englishman has found playing time hard to come by at the start of the 2018-19 campaign, but his match-winning display at Stamford Bridge will no doubt serve as a stark reminder of his qualities to head coach Maurizio Sarri.

Loftus-Cheek’s hattrick has also earned him a place in the Chelsea record books, as he became the first Blues player to score a triple in Europe for 12 years.

Ruben Loftus-Cheek is the 1st Chelsea player to score a hat trick in Europe since Didier Drogba against Levski Sofia back in 2006. #CFC

Didier Drogba was the last man to achieve the feat, against Levski Sofia in 2006 and despite Chelsea’s success in the Champions League since then – including a 2012 win – the club’s attacking players have failed to match the Ivorian’s exploits since.

Loftus-Cheek has finally ended that streak though and he will hope that he has done enough to retain his place in the starting XI for the team’s next Premier League game on Sunday, away against Burnley.

The Blues are joint third in the table after drawing 2-2 against Manchester United last weekend and they could do with a win to keep the pressure on Manchester City and Liverpool above them.

Loftus-Cheek has taken a huge step forward in his career tonight and supporters will hope that he continues to get the chance to shine for Chelsea with an important run of fixtures on the horizon.