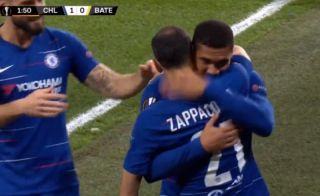 Chelsea midfielder Ruben Loftus-Cheek has capped a rare start with a brace for the Blues in tonight’s Europa League clash with BATE Borisov.

It took little over a minute for Maurizio Sarri’s side to open the scoring at Stamford Bridge, with Loftus-Cheek finishing emphatically after a neat low cross from Davide Zappacosta.

MORE: Chelsea increasingly tipped to seal £35million transfer that could transform their season

Moments later, the England international grabbed his second of the night from the deftest touch from a corner.

Incredibly, with less than ten minutes played at the time of writing, Loftus-Cheek is really making the most of his opportunity tonight and is now on a hat-trick!

Watch videos of both goals below:

Another young England star making an impact in Europe ??????? pic.twitter.com/0ioqPkemmx