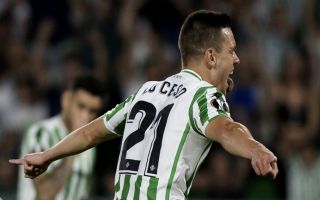 Real Betis secured a shock 2-1 Europa League win against AC Milan on Thursday night, thanks to a brilliant strike from Giovani Lo Celso.

Antonio Sanabria opened the scoring after 30 minutes for the visitors in the Group F clash and Lo Celso made sure of the three points with his wonder goal ten minutes after half-time, which stunned the San Siro into silence.

The ball broke kindly to the Argentine midfielder on the edge of the box and he took one touch to set himself before curling a fantastic strike into the top left-hand corner of the net, which could end up being a contender for goal of the tournament.

Patrick Cutrone grabbed a late consolation for the Rossoneri, but ultimately, after a disappointing derby defeat against Inter Milan last weekend their woes have been compounded by a second loss on the bounce, much to the dismay of head coach Gennaro Gattuso.

Check out Lo Celso’s 25-yard winner below, via Twitter:

Really nice 20+ pass move from Betis, and a quality finish from Lo Celso to put them two up.

William Carvahlo breaking lines with dribbling very well. If he continues on the same trajectory, he will be a top 10 midfielder within the next two years. pic.twitter.com/b0YclblJ9Q

Lo Celso is some player, no?pic.twitter.com/1e3X6tIAfR

‘He can’t stay next year’ – These Barcelona fans aren’t happy with Setien despite win over Napoli August 8, 2020 22:15
FC Barcelona