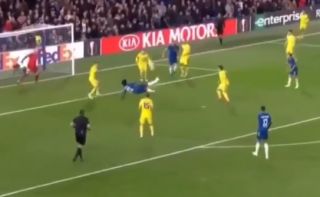 Chelsea winger Willian got an attempt at an overhead kick badly wrong against BATE Borisov this evening – and some Manchester United fans noticed.

The Daily Mirror notably linked the Red Devils with a potential swap deal involving Willian and Anthony Martial back in the summer transfer window, which obviously ended up never going through.

MORE: Ruben Loftus-Cheek does something no Chelsea player has done for 12 years

These United fans are now delighted after watching Willian’s performance tonight, which was pretty neatly summed up by this awful overhead kick that he skied well over.

Here’s a clip of the attempt below, and some tweets from gloating United supporters…

OMG.. Spectacular bicycle kick from an unmarked Willian. What a Player. pic.twitter.com/QiEG0UkXH0

I still don't understand why United/Barca wanted Willian in the summer.