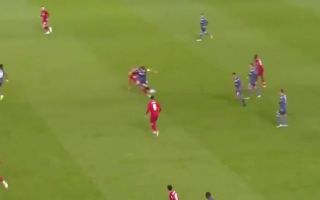 While Mohamed Salah and the Liverpool attacking trident would have taken most of the plaudits in the 4-0 win over Red Star, Fabinho put in a classy display of his own.

Salah, Sadio Mane and Roberto Firmino were all on the mark in the victory at Anfield in Liverpool’s Champions League outing, boosting their hopes of advancing from their group.

While their superior quality in the final third and finishing was undoubtedly the main talking point of the game, Fabinho went about his business in midfield in effective fashion, as detailed by the statistics below.

From making nine successful tackles and 80 passes, the Brazilian ace was key in helping Liverpool control the game and as seen in the video below, his ability to read the game and produce crunching tackles saw him snuff out several Red Star attacks before they really even got going.

It’s been a slow start to life in England for the 25-year-old as he’s made just five appearances in all competitions so far this season.

Nevertheless, with performances like the one seen on Wednesday night, it should be merely a matter of time before he starts to become a focal point in Jurgen Klopp’s plans moving forward as Liverpool look to compete on various fronts as the season progresses.

Klopp: “For his birthday present, we played his favourite system!”

Fabinho does not mess about ? pic.twitter.com/kTjZmQl3XB