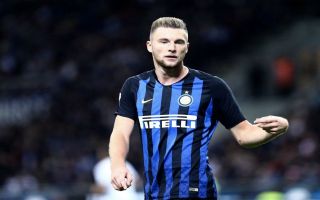 Inter Milan centre-back Milan Skriniar was at his best in the Champions League last night when dealing with Barcelona’s Phillipe Coutinho.

Goals from Rafinha and Jordi Alba sealed a 2-0 win for the Blaugrana at the Camp Nou in Group B, but in typical Italian style, the visitors managed to frustrate the Spanish champions for large periods.

According to The Sun, Slovakian centre-back Skriniar has been linked with a move to Manchester United and one moment in Wednesday night’s game highlighted exactly why.

SEE ALSO: Jose Mourinho told who he needs to bring to Man United – and it’s not new signings or a director of football
“We’ve officially hit rock bottom” – These Man United fans frothing at the mouth after bizarre Mourinho comment
Video: Lukaku’s glaring deficiencies encapsulated in one embarrassing moment for Man United against Juventus

Coutinho picked the ball up deep into Inter’s half on the left-hand side with the intention of coming back in to wreak some havoc, but Skriniar nipped in quickly to dispossess him twice, ultimately starting a counter-attack for the Serie A giants.

Jose Mourinho could certainly use a no-nonsense defender of his ilk at Old Trafford at the moment!

Check out the 23-year-old showing off his credentials below via Twitter:

Coutinho getting absolutely demolished by Skriniar has made my day. #LFCpic.twitter.com/JpSthXjRAK

Skriniar vs Coutinho last night. Would take him at United in a heartbeat. pic.twitter.com/wEOgtr7ZZC