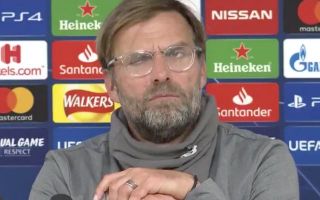 Jurgen Klopp was dismissive of suggestions that something is perhaps troubling Mohamed Salah after his muted celebration in Liverpool’s win over Red Star Belgrade.

As noted by The Express, Salah’s celebrations after bagging a brace at Anfield raised some question marks with pundits, while fans also shared their view on it, as seen in the link below.

SEE MORE: Some Liverpool fans have a theory on why Mohamed Salah has stopped celebrating his goals

Having struggled to hit top form so far this season, the Egyptian international was arguably a relieved man as he continues to find his feet and he certainly looks to be back on track now.

Klopp though was seemingly initially baffled by the question over why his talisman didn’t appear to be celebrating his goals with the same vigour as he usually does before dismissing entirely any suggestion that he’s not happy.

The 26-year-old has now scored six goals in 13 games so far this season along with two assists, and with the Merseyside giants still on track to compete for major honours this year without him being at his best, it’s arguably a positive thing for Klopp and supporters to see that others have stepped up around Salah.

Should he continue to find the back of the net regularly and in big moments to help his team out, his more excitable celebrations will surely return while Klopp jokingly added that he certainly knew his star man wasn’t happy when he was substituted off…

? Klopp on Salah ‘not celebrating’ after his goals… pic.twitter.com/pShPFc1t5M