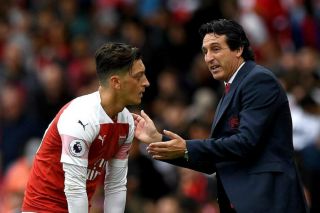 After putting in a world-class performance against Leicester City on Monday night, Arsenal ace Mesut Ozil is still missing key characteristics to be among the best in the world, says Guillem Balague.

The 30-year-old playmaker not only broke a record with his goal by becoming the leading German goalscorer in Premier League history, but he was influential in both goals for Pierre-Emerick Aubameyang as the Gunners turned on the style in the second half.

With Ozil playing at that level and being hugely influential, it bodes well for Unai Emery moving forward as with his vision, creativity and technical quality in the final third, he is capable of unlocking any defence and being a fundamental fixture in Arsenal’s pursuit of major honours.

However, Balague has fairly argued that while Ozil was sensational against the Foxes, he must do that more consistently and must have the necessary mentality to be considered one of the top players in the world.

Further, he believes that he must work harder in training to become a more complete player, and believes that process could happen under Emery after the Spanish tactician took charge at the Emirates this past summer.

Ozil has bagged four goals and an assist in nine games so far this season, but the constant criticism of him is that he fails to turn up in the big games and goes missing too often.

If he can fix that major issue, then perhaps he could move up into the elite level. For now though, Balague arguably makes a fair point that few can disagree with in terms of what is holding Ozil back from getting there for now.