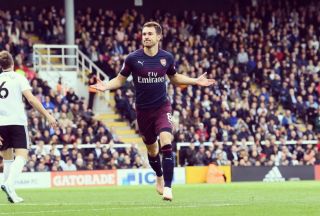 Arsenal ace Aaron Ramsey has again revealed that he has been left baffled by the club’s decision to withdraw their contract offer to him.

The 27-year-old will see his current deal expire at the end of the season, at which point he is now expected to leave the Emirates on a free transfer.

SEE MORE: What Mesut Ozil said on his critics outside of Arsenal in subtle dig at pundits

Another option would be to sell him in a cut-price deal in January to avoid losing him for nothing, but the Welshman is still playing a key role for Unai Emery this season.

He’s provided three assists and scored a goal in 11 appearances, while he captained the side in their 11th consecutive win in all competitions after sealing three points against Sporting in the Europa League on Thursday night.

With that in mind, it’s expected that he will at least see out the campaign at Arsenal. However, that would also suggest that the smart decision would be to extend his stay in north London if he is to play a crucial part in their push for success.

However, he has again spoken publicly about how it’s the club who have essentially removed their offer and so he ultimately has no choice but to accept an exit as he waits for an explanation.

“Hopefully somebody will come up and tell me why,” he is quoted as saying by The Guardian. “I’ll accept that if there’s a reason. When the time is right, I probably will find out but that hasn’t happened yet.

“There is no contract on the table at the moment so there is nothing for me to consider or whatever. We all know that the contract was taken away off the table. I’m not sure exactly why because a few weeks before we sort of agreed and I was ready to sign.”

Meanwhile, the Arsenal stalwart was also asked if he would consider a move to Tottenham if an offer arrived. Gunners fans will undoubtedly like his answer.

When asked if he would be interested in a move to Tottenham, he responded: “No,” as per the Guardian.