Barcelona secured a 2-0 win over Inter in the Champions League on Wednesday night, but Ousmane Dembele played no part in the game.

The 21-year-old was an unused substitute for the encounter, with coach Ernesto Valverde instead opting to play Rafinha as part of his attacking trident at the Nou Camp.

SEE MORE: How Barcelona could line up vs Real Madrid: Valverde solution to solve Messi absence

Reports soon filtered out that Dembele has been snubbed due to his lateness in reporting for training recently, and it’s said to have happened more than once and so the Barcelona coach opted to leave him out as a result.

Clearly the French international has found the funny side of it as seen in the image below, as he reacted to an Instagram post detailing the alleged lateness by merely posting a string of crying laughter emojis.

That would suggest that the reports aren’t accurate. However, the actual reason behind Valverde not using him might not be quite so amusing for him as he’ll be desperate to play.

Particularly with Lionel Messi currently out injured, it would be a shock to see him remain on the bench in the coming weeks whether he’s on time at training or not. 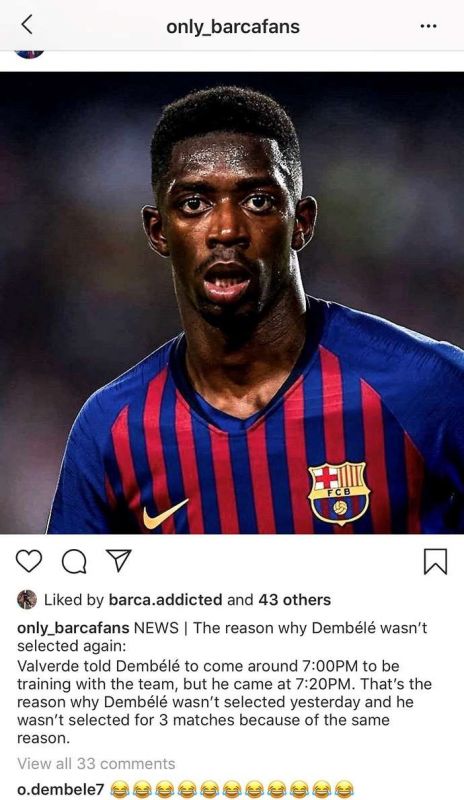