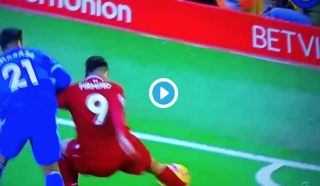 Roberto Firmino took showboating to the next level this afternoon, as the Liverpool star hit a no-look, nutmeg back-heel on Cardiff City star Victor Camarasa to prevent a corner kick.

The Brazilian star, who has been known for pulling off outrageous no-look moment during his time with the Reds, took his showboating talents up a gear this afternoon at Anfield.

The home side were about to concede a corner, however Firmino was on hand to save the day, as he hit the audacious skill move seen below to prevent such event from occurring.

Here’s a clip of Firmino’s sublime piece of trickery from this afternoon’s clash. We can’t wait to see what skill he’s gonna manage to pull off next after seeing this!