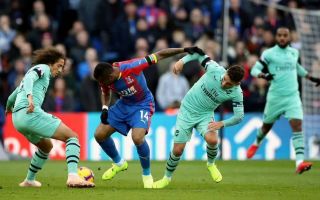 Arsenal manager Unai Emery has explained that he took Hector Bellerin off at half time against Crystal Palace because of an injury.

The Spain international had a muscular problem, according to ESPN’s Arsenal reporter Mattias Karen, though it’s not yet clear how serious a blow it is to the player’s hopes of facing Liverpool next.

Arsenal drew 2-2 with Crystal Palace this afternoon, with the Gunners conceding a penalty late on after going 2-1 up in the second half.

Emery is known for turning things around for Arsenal with his half time team talks, though he also caught attention today for taking Bellerin off and replacing him with Stephan Lichtsteiner.

Emery says Bellerin has a muscular problem, but "hopefully not serious." Too early to assess his availability for Liverpool game.

This, however, was not a tactical decision, but simply because Bellerin was seemingly not fit enough to continue.

Fans will hope the 23-year-old can be back in action soon as Arsenal have a big game against Liverpool in the Premier League next weekend.