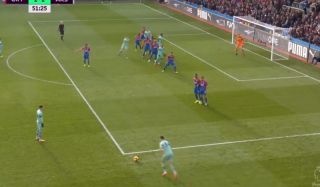 Arsenal midfielder Granit Xhaka levelled things up early on in the second half today against Crystal Palace with a stunning strike from a free-kick.

The Switzerland international looked to be in a position to cross the ball into box, but instead went for the far corner.

As he often does with his long-range efforts, he found the back of the net, and celebrated with manager Unai Emery, whose half time team talk has clearly done the job again.

The Gunners have now scored 24 of their 34 goals under the Spaniard in the second half – having often gone in behind or level at half time in their matches this season before going on to win.