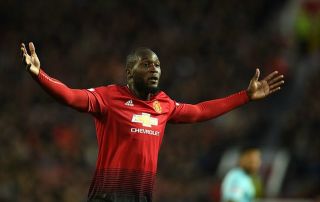 Manchester United won against Everton today. Romelu Lukaku didn’t start the game. And yet, at the end of the match many fans are focusing on quite how bad the Belgian was when he came on as a substitute.

The Red Devils held on for a 2-1 win at Old Trafford this afternoon thanks to goals from Paul Pogba and Anthony Martial, but Lukaku still managed to sour the mood when he came on in the 65th minute.

The 25-year-old showed some bad touches and generally looked sluggish, off the pace and unconfident again in his relatively short time on the pitch.

After what is now a run of nine games without a goal for United in all competitions, it’s little surprise some fans seem to think he’s genuinely finished.

Social media is full of some scathing remarks on Lukaku right now, and we’ve put together the most damning ones for you below…

Hehehe yaa, if he’s winning they will keep his job. Am tired of seeing him. Man lukaku is finished! https://t.co/BB0ox2r0VR

Lukaku is so finished man

Since Lukaku came on we've been shocking. ? #lukaku #mufc

Our play has been awful since lukaku has come on #mufc

Lukaku is completely done out here

One lesson from this game is that King Lukaku disrupts our play. When he's on, the players just want to lump the ball to him. Bench him