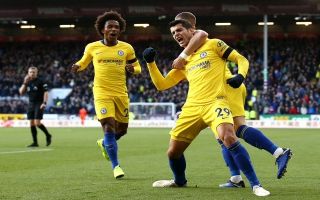 Some Chelsea fans singled out star Willian for his shocking dive during the first-half of their clash against Burnley which resulted in the Brazilian being yellow carded.

Chelsea went into half-time with a 1-0 lead thanks to a goal from Alvaro Morata after a perfectly weighted pass from in-form midfielder Ross Barkley.

Chelsea managed to create several chances during the first half and the Blues should have have really went into the break with more to show for their excellent chance creation this afternoon.

Willian made a shocking dive on the stroke of half-time when running into the box and the Brazilian was rightfully shown a yellow card by the referee and some Chelsea fans were unimpressed with the winger’s conduct.

Check out the reaction to Willian’s dive below:

Seems like Morata got a yellow card for being the victim of a foul,

Willian is just an embarrassment

I've never seen anyone be this consistently awful, Willian actually had the audacity to dive in the box there.

Pathetic dive from Willian there, just why???

Great assist from Barkley, uncharacteristically composed finish from Morata. Would like to see Willian dropped for that dive. Shameful. #BURCHE #Chelsea #CFC

That is an embarrassing dive from Willian

The club who sold us Willian are still laughing can we have the same in Jan.. Sell him please. #BURCHE
Morata should have ended the game in first half.

Chelsea will be looking to turn their fantastic chance creation into goals in the second half as it looks like Burnley simply can’t handle with the excellent passing on display coming from Chelsea’s central-midfielders.

After Chelsea’s Premier League encounter with Burnley draws to a close be sure to follow live action of the eagerly anticipated ‘El Clasico’ at 3.15. Click here to see how you can follow the coverage online and on TV.