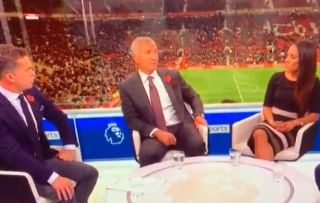 We’ve truly witnessed one of the craziest moments in 2018 today as Graeme Souness actually praised Paul Pogba as being ‘really good’ today for Manchester United against Everton.

Just watch the video clip below as the former Liverpool man stuns his colleagues in the studio with an actual compliment for a player he’s become known for having a bit of a vendetta against for some time.

Pogba certainly hasn’t lived up to expectations for much of his United career, but many fans feel Souness often singles him out a tad unfairly.

And it seems other pundits must feel the same judging by this priceless reaction!

WE'VE DONE IT LADS! GRAEME SOUNESS HAS GIVEN PAUL POGBA SOME PRAISE pic.twitter.com/xOt8XsDReE

Graeme Souness just complimented Pogba and this was the studios reaction??? pic.twitter.com/V7J5qEF8Zg

Souness praised Pogba and the rest of the studio were so shocked ?

Graeme Souness complimenting Pogba. The end is nigh… pic.twitter.com/n1WXOO8vP6

I was alive when Souness praised Pogba lol #MUFC