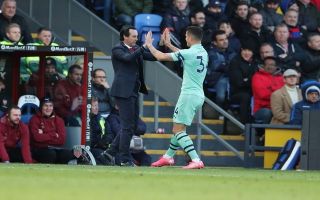 Arsenal manager Unai Emery has revealed what he told Granit Xhaka moments before the 26-year-old scored a screamer of a free-kick for the Gunners.

Xhaka today played as a stand-in left-back for Arsenal given injuries to both Nacho Monreal and Sead Kolasinac, you can check out Xhaka’s stunning free kick here.

The Switzerland international immediately ran over to celebrate with the new Arsenal boss after his stunning free-kick.

Emery revealed that it was in fact him who instructed Xhaka to take over on free-kick duties during his half-time team talk:

‘In half-time we spoke about these free-kick situations and his quality on the free-kicks is good – I told him to try from the free kicks. I push him and he did that,’

Xhaka is quickly turning into a fan-favourite at the Emirates Stadium with his performances this season and the midfielder looks like a completely different player under new boss Emery.

With Arsenal’s match now finished be sure to follow live action of AC Milan’s match against Sampdoria with Gennaro Gattuso’s men looking to bounce back from two consecutive defeats.