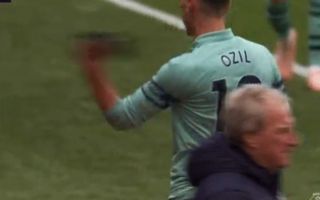 Arsenal midfielder Mesut Ozil threw a bit of tantrum this afternoon, after he was substituted off for the Gunners by manager Unai Emery during their match against Crystal Palace at Selhurst Park.

The north London side were 1-0 down going into half time thanks to a penalty from Milivojevic, however a quick-fire double from Granit Xhaka and Pierre-Emerick Aubameyang turned the game on it’s head in favour of the Gunners.

Ozil was subbed off by Emery for Danny Welbeck with around 15 minutes to go, and the German international didn’t take very kindly to the Spaniard’s decision.

Ozil was seen throwing his gloves on the ground in frustration after being hooked off, something we can’t really understand given how he wasn’t exactly having his best game for the Gunners.

Here’s a clip of Ozil’s reaction to being taken off this afternoon, one that won’t be impressing manager Emery at all.

Ozil, who has been on the fringes of things, replaced by Welbeck.

Ozil then throws his gloves to the floor after walking past Emery.

Ozil petulantly throws his gloves down after being taken off.

Ozil throws his gloves at the bench after being taken off. Doesn't look happy to be substituted at all. Welbeck on.