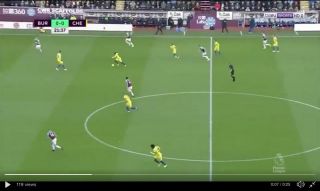 Goal-shy Chelsea striker Alvaro Morata found the net against Burnley this afternoon after a defence-splitting pass from in-form Ross Barkley.

22 minutes into the match-up Chelsea recovered the ball on the halfway line before Barkley picked up the ball in the final third.

The former Everton man played a great pass between two Burnley defenders to tee up Morata who produced an excellent finish to give the Blues the lead.

The goal came only moments after winger Willian hit the post for the Blues.

The goal was Morata’s third of the season and could spell a resurgence for the Spaniard who has struggled since moving to Stamford Bridge last summer for a fee reported to be £60m according to BBC Sport.