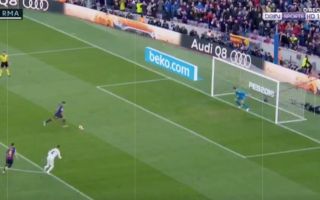 Luis Suarez converted from the penalty spot to give Barcelona a two goal advantage against Real Madrid in El Clasico.

The penalty was given thanks to VAR, as Raphael Varane was found to have fouled Suarez in the box following a low cross from left back Jordi Alba.

The spot kick from Suarez was superb, as he found the bottom left hand corner to beat a fully stretched Thibaut Courtois in the Los Blancos goal.

Here’s a clip of Suarez’s penalty this afternoon. Cool as you like!