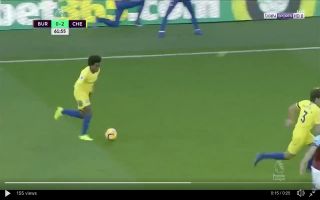 Chelsea star Willian got himself on the scoresheet in wonderful style with a lovely strike from the edge of the box in the 62nd minute of the clash against Burnley.

Willian picked up the ball on the wing before using his trademark skill to trick his way past Burnley’s Johan Berg Gudmondsson before firing the ball into the far post bottom corner, well out of reach of Burnley stopper Joe Hart.

Willian certainly fired back to his critics who earlier called for the winger to be sold and deemed him an ’embarrassment’ after he was yellow carded for a dive in the first half of the game. Check out some fans’ reaction to Willian here.

Burnley 0-3 Chelsea
Follow for all goals on time ??
#BURCHE

Chelsea are looking like serious title contenders under new boss Maurizio Sarri and the Blues look set to leave the misery of last season well behind them if they can keep up their impressive performances.

With Chelsea’s Premier League encounter with Burnley now drawn to a close be sure to follow live action of AC Milan’s match against Sampdoria with Gennaro Gattuso’s men looking to bounce back from two consecutive defeats.