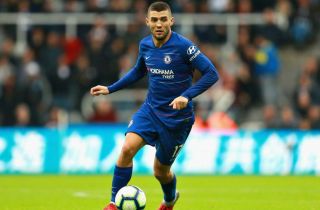 Chelsea midfielder Mateo Kovacic has discussed his loan move to the club this season and the prospect of sealing a permanent transfer from Real Madrid.

The Croatia international has made a great start to life at Stamford Bridge after a late summer switch from the Bernabeu, where he’d failed to establish himself as a regular starter.

Having played much more often for Chelsea, Kovacic admits it’s nice to be more involved with his club, though he concedes he is also more tired than he is used to after more of a fringe role at his parent club.

Despite that down-side, the 24-year-old told the Evening Standard of a number of reasons he’s very happy with the Blues, praising the quality of the team after their flying start under Maurizio Sarri, and also admitting he is enjoying living in London.

‘It’s too early for these questions (about a permanent transfer), I am here and very happy,’ Kovacic told the Standard.

‘(Playing regularly) is good, I’m a little bit tired. I was not used to playing every three or four games and here it is very tough football.

‘You can’t relax against anybody so it’s a little bit difficult but I really enjoy it. We have a great team, great fans and the city is nice. I like it a lot here.

‘I go around and I enjoy the city — it’s huge and I haven’t seen enough of it yet. I’m looking forward to getting to know it more.’

Chelsea fans will surely be hoping a permanent deal can be done for Kovacic, who truly looks at home playing the kind of football CFC have played under Sarri this term.

Along with fellow summer signing Jorginho, Kovacic has given Chelsea far more quality in the middle of the park after a difficult season last year with players like Tiemoue Bakayoko and Danny Drinkwater playing more often in that position.