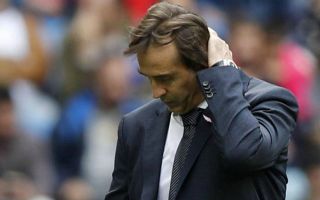 Real Madrid officially announced that they’d sacked Julen Lopetegui on Monday night, and so now the search for a long-term replacement begins.

The decision arrived after a poor run of results for the Spanish tactician, which culminated in the heavy 5-1 defeat to Barcelona in El Clasico at the weekend.

That was seemingly the last straw for club president Florentino Perez, as the club released an official statement confirming their decision, with Santiago Solari put in charge of training on Tuesday.

Given his lack of experience in coaching, it would be a major shock if he was to land the job on a permanent basis.

With that in mind announcing a long-term successor to Lopetegui shouldn’t be too far away from Real Madrid. However, according to AS, they have 14 days from the day that they announced the sacking to appoint a new coach as per league rules.

It’s suggested that Solari could oversee the next four games, but beyond that he would seemingly either have to be announced as the full-time replacement or the club would face a fine.

Despite intense speculation suggesting that Antonio Conte was ready to take the position, Goal.com note how that might be unlikely now as talks over a deal with the Italian tactician may have broken down.

In turn, it remains to be seen who now emerges as the favourite for the job, or perhaps if Conte can overcome those issues and still arrive at the Bernabeu in the next fortnight.

Nevertheless, whether it’s the former Chelsea and Juventus boss or not, the clock is ticking for Real Madrid and in the interests of their season, they will also surely be eager to find a long-term solution sooner rather than later.