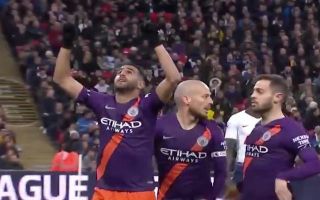 Riyad Mahrez broke the deadlock for Man City after just five minutes of their encounter with Tottenham at Wembley on Monday night.

Kieran Trippier will be disappointed with his inability to snuff out the attack, but Raheem Sterling took full advantage of his poor play and produced some excellent work in the build-up to Mahrez’s opener.

The tricky winger managed to get himself to the byline, as seen in the video below, and squared for Mahrez to tap home as he made a perfectly timed run into the box.

The former Leicester City man then paid a tribute to former Foxes owner Vichai Srivaddhanaprabha with his celebration, after he tragically died in a helicopter accident outside the King Power Stadium on Saturday.

City will be buoyed by the goal though as they look to pick up all three points to put themselves back level with Liverpool at the top of the Premier League table.