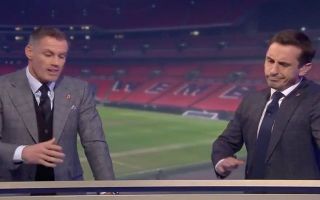 Sky Sports pundits Gary Neville and Jamie Carragher were involved in a heated debate over Tottenham after their defeat to Man City on Monday night.

Ultimately, both raised their concerns over Spurs and how they believe that a window of opportunity is set to pass them by having had their best squad and manager in many years.

SEE MORE: Tottenham and Man City both trolled as these viewers notice something about Wembley

However, while Carragher continued to raise his frustration with their lack of spending over the last four years, Neville was keen to make his point that the money spent on their new stadium has essentially tied their hands and has prevented them from spending big in the transfer market.

The pair couldn’t agree on that specific point, and it led to the debate below where they seemingly got more and more high-pitched as the debate went on.

Neville went on to launch a scathing attack on Tottenham over their flaws over the years and went on to add that he believes Mauricio Pochettino could now have his head turned with Real Madrid looking for a new coach after sacking Julen Lopetegui on Monday night.

Nevertheless, the pair produced some great TV with their debate below, as they could arguably be going at it over the lack of spending at Tottenham and the reasons behind it for the rest of the night.

Carragher makes a fair point in that Spurs have to show their ambition in the transfer market if they wish to take it to the next level and compete for major honours. However, Neville also offers a fair response in that the stadium has arguably taken up a lot of their budget.

“It feels like we are still watching the Spurs of two years ago. It is not sustainable”@Carra23 and @GNev2 clash over what success is for Spurs after defeat at home to Manchester City.