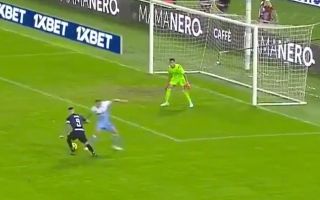 Mauro Icardi continues to prove to be one of the most prolific forwards in Europe as his double helped Inter sink Lazio in a 3-0 win at the Stadio Olimpico.

The Argentine forward was in the right place at the right time to pounce for his first in the first half, but he showed real class in front of goal for his second.

As seen in the video below, he showed great composure to firstly sell the dummy and create time and space for himself. From that point onwards, there was only one outcome as he produced the finish required to double his tally and secure the win for his side.

That’s now eight goals in just 11 appearances for the 25-year-old so far this season, and should he continue to find the back of the net with such regularity, it will undoubtedly help the Nerazzurri reach their objectives both domestically and in Europe.

Their win on Monday night moves them level with Napoli in second place in the Serie A table, six points adrift of leaders Juventus.