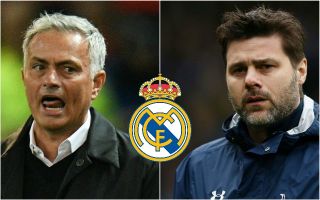 Ladbrokes have been in touch with us to inform us of a dramatic slashing of odds on Tottenham manager Mauricio Pochettino replacing Julen Lopetegui as Real Madrid boss.

Despite plenty of initial talk over former Chelsea manager Antonio Conte being in pole position to take the job at the Bernabeu after Lopetegui’s sacking, it seems Pochettino is now the prime target.

This is backed up by a report in the Sun stating that player power has led to Pochettino moving ahead of Conte in Madrid’s thinking, and the latest odds from Ladbrokes suggest there’s really something to it.

They claim Pochettino was 20/1 to be next Real manager yesterday, with those odds tumbling to just 3/1 overnight.

However, they still put Conte on 3/1 as well, while caretaker manager Santiago Solari is ahead of them both, as the odds-on 4/7 favourite at the moment.

Jose Mourinho’s name has also come up on more than one occasion, though the Manchester United manager is now just 33/1 to return to the Spanish capital.

Alex Apati of Ladbrokes said: “Has Poch taken Spurs as far as they can go? The latest odds suggest he may well call time on his spell in North London in favour of a move to Madrid.”

It’s been a difficult season for Los Blancos since the double blow of losing former manager Zinedine Zidane when he stepped down at the end of last season, and Cristiano Ronaldo then being sold to Juventus in the summer transfer window.

While Lopetegui no doubt looked out of his depth in the job, whoever comes in next is going to have a big task on their hands to get Madrid back to where they were.