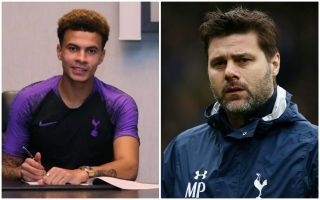 A number of Tottenham fans have noticed the distinct lack of manager Mauricio Pochettino in the picture alongside star player Dele Alli as his new contract was announced.

It’s become a bit of a meme in recent times that Pochettino is always there in these pictures with his arms around a player when they commit their future to the club.

In fact, we’ve gathered a few of the best ones below, with Alli looking a little lonely at the end there…

Did Pochettino have a pressing appointment with Real Madrid? ? pic.twitter.com/2dcK45e48K

We’re not the only ones to have noticed this somewhat alarming decision by Spurs here, which of course comes as talk linking Pochettino to Real Madrid starts to escalate.

The Sun reported today that the Argentine is now Real’s main target after yesterday sacking Julen Lopetegui, who performed dreadfully after replacing Zinedine Zidane in the summer.

Could Pochettino really be next in line at the Bernabeu? Well, these Tottenham fans are raising one or two eyebrows as their manager was clearly too busy to do his usual thing and sit proudly alongside Alli at the announcement of this good news…

Where's Poch?! WHERE THE FUCK IS POCH WITH HIS ARM ROUND DELE?!

Nothing says 'Off to Madrid' quite like the lack of Poch when one of our guys signs a new deal ? pic.twitter.com/bgkCRqsoaa

Where’s the Pochettino photo with him. ?? https://t.co/zYmqxpVw5D

Where’s the classic picture with Poch?

Where is the customary Poch arm around him?!